What is Multivariate Testing?

Multivariate testing is a useful technique for testing a marketing hypothesis where multiple variables are modified to gather insights on website changes.

The main goal of multivariate testing it to learn which combination of variables performs the best out of all possible combinations.

In digital marketing, this best combination relies on what the intended result of the multivariate test. Most of the time, these kinds of experiments are done to increase lead generation and conversions, increase conversion rate, lower bounce rate, and more.

Whatever combination results in the highest number of conversions or lower bounce rate would be declared the “winner” for that experiment.

The Multiple Variables of Multivariate Testing

Multivariate testing tests, you guessed it, a lot of variables; therefore, there are many variations of the same webpage in the experiment.

There are a lot of elements of a webpage that can be changed or modified. Text, pictures, headlines, call to action (CTA) buttons, forms, and even page layout are just some of the elements that can be tweaked during a multivariate test.

Once you have created at six versions of the webpage, they are tested concurrently with a live audience (users visiting your website) to find which variation is the most eye-catching and induces the most engagement.

If the number of variations feels a little confusing, keep this equation in mind:

What is the Difference Between Multivariate Testing and A/B Testing?

The metric of interest (i.e: conversion rate, bounce rate, etc.) is referenced across the original and the variation for a large sample of users. In this method, site visitors are shown either one version or the other. The users’ interaction with the variation and the original determine which version provides the better result.

Some elements that are tracked include what videos visitors watch, what buttons they click, whether or not they sign up for a newsletter or fill out a subscription form, and others. 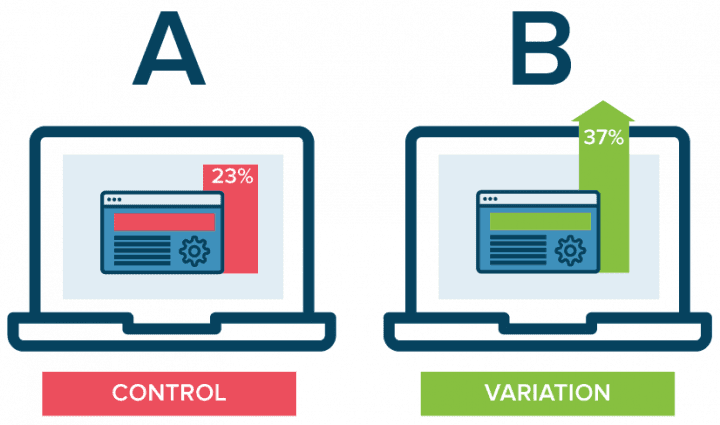 A/B testing is highly useful, but it does come with some limitations.

The limitations are clear: A/B testing only allows for one variation to be tested against the original. With certain applications, such as Google Optimize, up to three variations can be tested; however, the more variations that are tested, the more dilute the probability of finding a clear winner in the experiment.

For those who want to be a bit more thorough in their tests, multivariate testing is the best option.

Multivariate testing differs from A/B testing in one key way: you can measure more variations of a single webpage across multiple variables and still generate accurate results.

The idea is essentially the same, but the higher number of variables reveals much more information over time. Instead of getting two ideas of how a webpage works, you are privy to how the changed variables interact with one another, how users react to a number of changes, and how these changes positively or negatively impact those user interactions with your website.

Multivariate testing is often viewed as more advantageous than split testing because it offers a large amount of data and provides higher quality insights in return.

You can easily identify what areas need to be redesigned for the most impact with site visitors, which can increase online business considerably. This data is especially helpful when designing new and future pages: landing pages, blogs, social media posts, and more.

What are the Benefits of Multivariate Testing?

Further, multivariate testing can eliminate the need to run sequential A/B tests on the same page with the same goal. With a greater number of variations, you can cover all of your bases and get the best results in a shorter period of time.

The largest downside to multivariate testing, however, is that it takes longer to drive enough traffic to the webpage to generate insights. With more versions of a webpage, it can take some time to have enough traffic to view each variation organically. However, this can be remedied by proper promotion and advertising campaigns.

How Can I Benefit from Multivariate Testing?

Your website is the gateway to your business, and you deserve the best team of CRO experts to ensure that your business is executing effectively. Get a free proposal today to learn how your website can work more efficiently!

Looking at the growth rate of the SaaS industry, you’d think that people are more than willing to spend money on software solutions that promise to make their everyday lives (and professional endeavors) easier. Not quite, though. Despite projections forecasting the total SaaS spend to reach $171.9 billion in 2022, most buyers still prefer free solutions. […]

Convo ads are becoming increasingly popular ads within the B2B space. Reason being, you can get directly into your target persona’s inbox, at an extremely low cost; they are a great way to get your foot in the door and deliver a quick elevator pitch with a bit more context than the standard image ads […]

Max Serrato In PPC
A B C D E F G H I J K L M N O P Q R S T U V W X Y Z
We use cookies to improve your site experience. You can learn more or change your settings as detailed in our Privacy Policy. By continuing, you consent to accept our cookies.
Continue